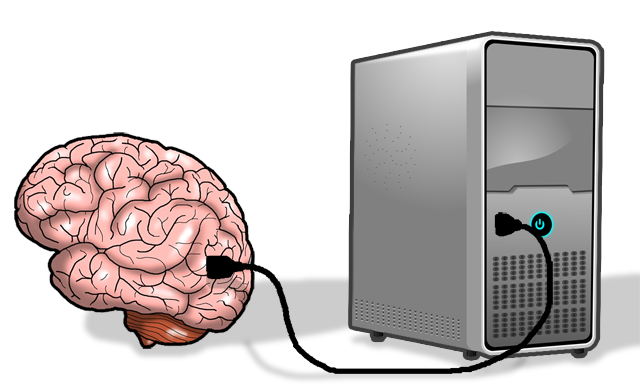 I’m a Ray Kurzweil fan.  Four of his books sit on my office shelves.  I’ve read them all (one of them twice).

But, I won’t be buying his latest.  “How to Create a Mind” (at least as he explained on the Diane Rehm show) argues that we are already merging with our technology (that is hard to argue) and that we will soon (within 20 years) be able to download our brain. . . thus, effectively backing up our brains and making us immortal.  It is a seductive idea and one that he has promoted before.  Frankly, I love the idea.  Wouldn’t it be nice to backup my brain?  Wouldn’t it be nice to know that even if my body died, in some way I’d go on?  But, just because it’s nice, doesn’t mean it’s true.
There have been many comments about “How to Create a Mind,” but what strikes me is a language problem.  Kurzweil is using some very specific words to compel us to believe his ideas, just re-read the paragraph above.  We are merging with our technology.  We’ll be able to download our brain.  And this is where I think Kurzweil is making a fundamental error.  We are not in fact, merging with our technology.  We are certainly becoming more dependent on it.  More linked to it.  A few people have it implanted in them, but merging seems to me a word choice that exaggerates what is going on.
And, even more so with the phrase download our brain.  Yes, of course, we are able to store more of our lives digitally than ever before.  Next year, we’ll do even more.  And, someday, enormous parts of our lives . . . perhaps even some of our memories will be stored digitally.  In some ways, we will be able to download our brain.  But, that’s the catch.  It won’t actually be a download of our brain.  It will be something like it . . . in much the same way that the desktop on a computer is something like the top of a desk, but isn’t.  We’ll be able to do something like download our memories . . . but, it isn’t likely to be exactly that.
Kurzweil’s looseness in language allows him to say that we’ll merge with our technology and download our brains, so we will be able to live forever.  What a wonderful promise.  But, what if I said something similar: we’ll be incredibly linked to our technology and be able to store some of our memories.  I’ve said the same thing using different words.  Do you still think you’ll be immortal?