The (Possible) Realization of a Childhood Dream 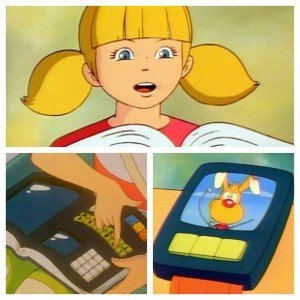 Penny with her Computer Book, Watch, and her dog, Brain.

People who are really into technology are also fascinated by magic. That’s my theory, anyway. When you see a piece of technology that makes you question what the limits of it’s capabilities might be, you become awestruck by the possibilities. Sure, you know it’s not actually magic, but it’s probably the closest thing we’ll get and that’s really exciting.

I frequently had these moments of awe as a child watching Inspector Gadget. Gadget’s niece, Penny, had a “computer book” and “computer watch” which allowed her to do about anything: hack into computers, take over the controls of vehicles, and communicate with her talking dog, Brain. This was the mid-1980’s, so there was nothing remotely close to this technology in existence. Thirty-some years later we have things like iPads and “smart watches” which are approaching the capabilities of Penny’s gizmos. This sets a high bar for my expectations of today’s wearables.

Maybe the bar has been set too high. A study from earlier this year reported that more than half of people who use wearable activity trackers stop using them after six months.  It’s sad to think of all those FitBits and FuelBands measuring the activity of their owner’s nightstands (which, by the way, are shockingly sedentary).  The truth is, those devices can get a little stale unless you’re already really into fitness or you benefit from a network of competitive friends who enjoy shaming you and your 2,500 daily step average.

Cue the angel harp music!  I’d be remiss if I didn’t mention the Apple Watch. Early next year this device will join the ranks of other “smart watches” offered by Samsung, LG, Pebble, Motorola, Asus, HP, Sony, Metawatch, Citizen, VEA, Mota, Hyetis, Archos, Kreyos, Omate, Qualcomm, Basis, Cookoo, Cogito, Leikr, and probably more, but I’m tired. I don’t currently own any of these devices, but for the first time during the Apple Watch announcement my inner-Penny was stirred and I could see myself wearing one of these devices everyday and finding it useful. And, maybe even fighting Dr. Claw. To be fair, I’m a fan of Apple and could have been swayed by Jony Ive’s hypnotic voice-over.

I guess we’ll find out in the new year!