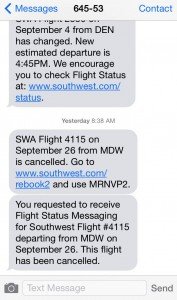 I was at a conference in Chicago yesterday when a fire at an airport facility grounded all planes and caused thousands of flight cancellations.  All of the conference attendees were nervous about getting out of town, but as the morning session started, most everyone’s afternoon flights were still scheduled to go.
Then the flight cancellations started coming through. I found out about mine via a text message from Southwest.  The great thing about this text was that it offered me a website to click through to rebook my flight, and it included my booking code.  As I listened to the keynote, I clicked through and with about three clicks, I was rebooked on the first non-cancelled flight at 7 AM the next morning, which I’m currently on, very eager to get home to see my family.
In crises, people want to talk to someone. They want to explain that the plane has to fly, because they need to get to their sister’s wedding or critical sales meeting. Unfortunately, the desire to talk with someone will most likely reduce the odds of a satisfactory solution. I imagine if I’d called Southwest to rebook, I would have waited a long time and now be one of the 47 people listed on standby on this flight versus one with a confirmed seat.  I know from one of my colleagues that the wait time on the American Airlines Platinum line was 75 minutes, which means the regular wait time must have been hours.
Kudos to Southwest for once again making it so easy to interact with them that I prefer using their technology over their agents.  With technology that scales for situations like this, they won’t have to have the same level of customer service contingency because more people can, and want to, help themselves. Southwest’s marginal cost of serving me was basically zero and the experience was very positive, leading to more customer loyalty. This applies in other industries too – like banks who send texts to approve fraudulent charges, which likely increases customer responsiveness and surely reduces their customer service costs. 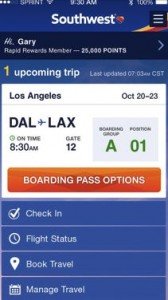 What may be tricky is that as people become more comfortable with technology and it makes transactions easier and easier, they may be incented to take advantage of the system. I’d assert that people are more likely to buy multiple refundable airline tickets online than they are via an agent. I was sure trying to do that yesterday to no avail! And we snagged multiple hotel reservations before knowing if I would stay in Chicago and whether I wanted to stay downtown or near the airport. So, there may be some implications that still need to be evaluated, but in general, technology is very strategic for both companies and consumers