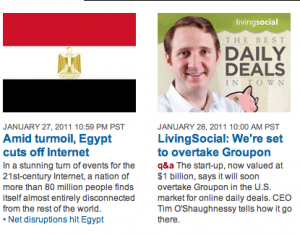 While taking a break for lunch on Friday, I stumbled upon an almost shocking juxtaposition of what I will call “social technology freedom”.
On the left, you have reports of the fevered unrest that Egypt is going through now. Many of the reports are peppered with comments about the government severing both internet activity as well as traditional mobile device communication. Social sites hosted outside of the country that often provide “windows” into what’s going on, such as Facebook, are reportedly blocked by the 4 big internet providers in the country. And citizens are having trouble getting in touch with family and friends.
Whereas, on the right, you have LivingSocial touting the growth of their business model. Similar to Groupon’s business model and their almost $6 Billion Google deal), LivingSocial is built squareley on the success of social media sites in the US like Facebook and Twitter. They are predicting substantial growth maybe even to the point of passing Groupon in business in the near future. The lifeblood of such socially focused companies is openness and internet access.
In previous blogs, I mentioned the way China throttles back access to the internet for its residents, but this wholesale break in contact with the outside world, combined with decreased social connectivity is still pretty unprecedented stuff. And these two reports on the CNET news homepage really illustrate how unfettered access to such social technology is for people in more moderate, open societies compared to their counterparts in the East.