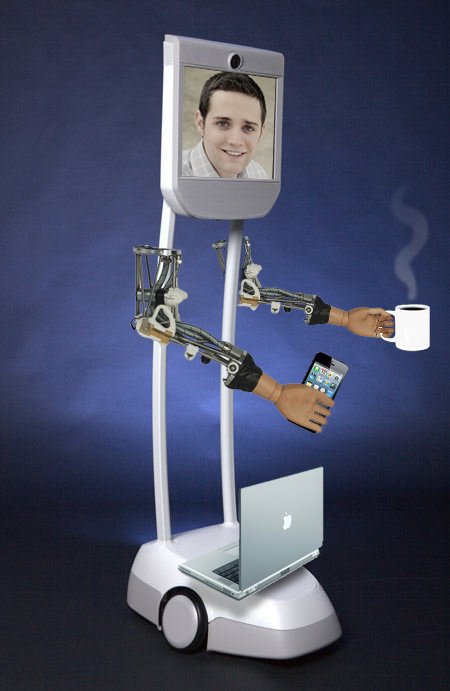 I do a lot of telecommuting for work, as many people do these days, and therefore am intrigued by any potential changes or advances in technology geared toward this type of thing. So, when I read a recent article on informationweek.com comparing telepresence robots, I was about as excited as a new puppy dog whose owner had just returned from being in the garage for 5 minutes.  Let’s call it benign interest with a side of mild enthusiasm. Though the concept of telepresence can apparently be traced back to science fiction novels as old as 1942 (according to Wikipedia), my personal oldest memory of the concept comes from the 1993 movie “Demolition Man.”

Practical application of the concept, again according to Wikipedia, can be seen as far back as 1990, though only in the past few years has anything really started to (kind of) take off. There are a handful of companies working on robots that they hope will be used in various workspaces, though they basically appear to be FaceTime equipped iPads glued onto broomsticks attached to RC cars. I think they will have a purpose in environments where people aren’t able to easily access a computer at a desk: construction sites, schools, museums, art installations, laboratories, war-zone tourist destinations, trade shows, and underground rap battles.  But, in work environments where people have access to computers and cell phones, and no real need to move around the space, the teleconferencing tools already available today will suffice – as long you improve the sound and video quality, as well as improve the internet connection reliability (which are issues you won’t avoid with a robot anyway).

I did want to share this video from Suitable Technologies demonstrating their remote presence device named Beam. I burst out laughing at the end when the main character finishes her workday, turns to her son who is off-screen, smiles, and reaches her arms out. There is a long enough pause before he runs into frame, which had me honestly expecting him to enter remotely on a Beam device of his own (presumably too lazy to stop playing video games and come downstairs to hug his mom).