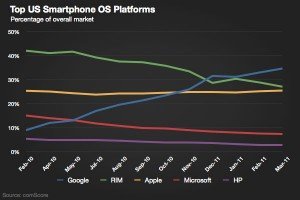 This weekend, I had an argument with a friend about the marketshare of various mobile suppliers. He was arguing that Google ‘s Android was now the top Operating System. I thought he was nuts.

Well, I can admit when I’m wrong. As the chart to the left shows, Android has picked up significant market share over the last year, primarily at the expense of Microsoft and RIM. Apple is basically stuck in what appears to soon be second place (assuming Microsoft continues its downward slide . . . which seems likely in the short term.) It is absolutely amazing that Google could pull this off this quickly.