As sure as we were that we wanted two kids and only two kids, my husband and I were sure that we’d buy a minivan sometime before the birth of the second child.  Yes, as my “reward” for carrying this pregnancy 9 long months, I get a new minivan to replace my aging Acura RL sedan.  And here we are, 48 hours from being induced, and our garage is still missing its second most important expected arrival of the week. 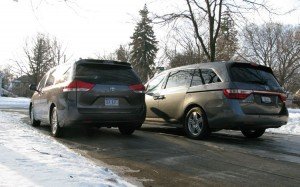 What happened?  Well, we procrastinated on the shopping and finally went out to “pick” our minivan a few weeks ago.  Armed with last year’s Consumer Reports and a lot of opinions, we knew going in we had exactly two choices: a Honda Odyssey or Toyota Sienna.  As we walked into the Toyota dealership, I remembered my friend telling me about her husband purchasing their minivan.  The sales guy asked him excitedly about what model and options they were interested in and the husband said, “I don’t know … it is a minivan.  Can’t you just go get me one?”  That was about what I thought: Odyssey or Sienna, whatever, let’s just pick one and be done with it.
We test drove the Sienna first. Compared to my RL, it was pretty slow and missing a lot of cool features, but it maneuvered fine and rode comfortably.  Eric was less impressed, so we headed to the Honda dealership next.  As the sales guy got Eric all excited about the various seat configurations and how much stuff he could haul around, I discovered that there was no option for keyless entry into the vehicle.  I realized at that moment that I wasn’t sure I wanted a minivan at all.  Because I was so sure we needed this minivan with its sliding doors and extensive seating, I’d let go of my run-flat tires, collision mitigation system, voice activated everything and many other features that I had enjoyed for six years.  But once I found out there was no way to enter the car without finding my keys, I wanted out of that dealership as fast as possible.  I informed Eric emphatically that the Odyssey was no longer an option and so we might as well just go buy the Sienna based on my (9-month pregnant and impatient) process of elimination.
Well, Eric wasn’t so sure.  He liked the Odyssey, so he researched this keyless entry thing online and found out I wasn’t the only person griping about this feature, so he wondered if we should wait till the fall or next year when it might be added.  We even considered adding it after market.  We continued to find other things wrong with the Sienna.  And when we couldn’t come to a good conclusion, we began to question the whole premise of buying a minivan entirely.  We started looking at SUVs and considered the cars in our garage with renewed interest.  We even looked at some other minivans we had ruled out before, only because they had keyless entry.  We’ve gathered passionate opinions from minivan and non-minivan owners ranging from “Get over it and find your keys – it is SO worth it for the sliding doors!” to “You really don’t need a minivan (but if you get one can you haul us around?”)
So, what in the world does this have to do with software selections?  Those of you who have been through disorganized or informal ones probably know already how similar our experience with minivans is to buying software in many companies.  How often do we see business stakeholders decide what they are going to buy before they really even start shopping?  How often do we think we are at the end of a buying process and find that one of the decision makers stops it because of some missing feature like my keyless entry?   How often do we get stopped because two decision makers find at the end that they have different priorities? Sometimes, we go all the way through the process before we realize we are looking at the wrong type of system entirely, hopefully before purchasing, but sometimes after it is too late.
The day before the keyless entry debacle, I helped my colleague Russ facilitate a workshop for one of our clients on their upcoming software selection.  Because of that, at the moment we were walking out of the Honda dealership, I realized a good consultant should have known better… or I should have hired Russ to organize our car evaluation project.  The parallels were spooky.  Just as we had interviewed the key users of the system at our client to determine their needs in replacing it, Eric and I should have discussed up front how we were planning to use this new car.  Just as we had facilitated a workshop to determine which system requirements were deal breakers, Eric and I should have determined before test driving cars that keyless entry was a necessity.  Just as our project had started with over one hundred vendors and narrowed them down based on requirements, Eric and I should have started with a broader list of automobiles and narrowed it down based on what really mattered to us, not what everyone else said.
Instead, we are confused and back to ground zero, and frustrated enough that we are probably not going to buy a car for a while.  I could apply my consulting expertise to help us get to a decision, but instead I’m going to have a baby and figure it out later… or, more likely, just let my husband handle it.  But, I won’t forget this when suggesting or leading future software selection projects!  There are good reasons we go through the processes we do…