When I was a graduate student studying Macroeconomics, the topic du jour was the Federal Reserve’s policy of Quantitative Easing; which, although controversial, staved off potential economic ruin during one of our nation’s challenging financial crises .  However, what was observed during this program was the fragility of the U.S. economy as shown in this chart which shows the macro effects of Federal Reserve TARP programs: 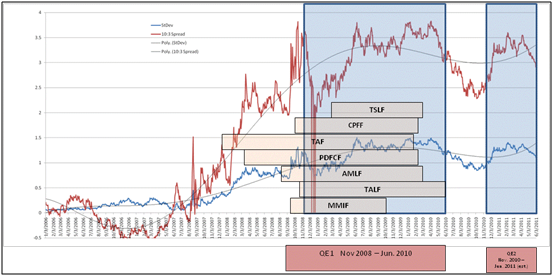 As was evident in this chart, when a trial end to QE1 was attempted, the macro effects were abrupt and painful.  In other words, the markets were not ready for the Federal Reserve to cease its status as a lender of first resort.

To look at it a bit different, the following is a chart that captures the course of the Dow Jones Industrial Average (DJIA) during this same date span: 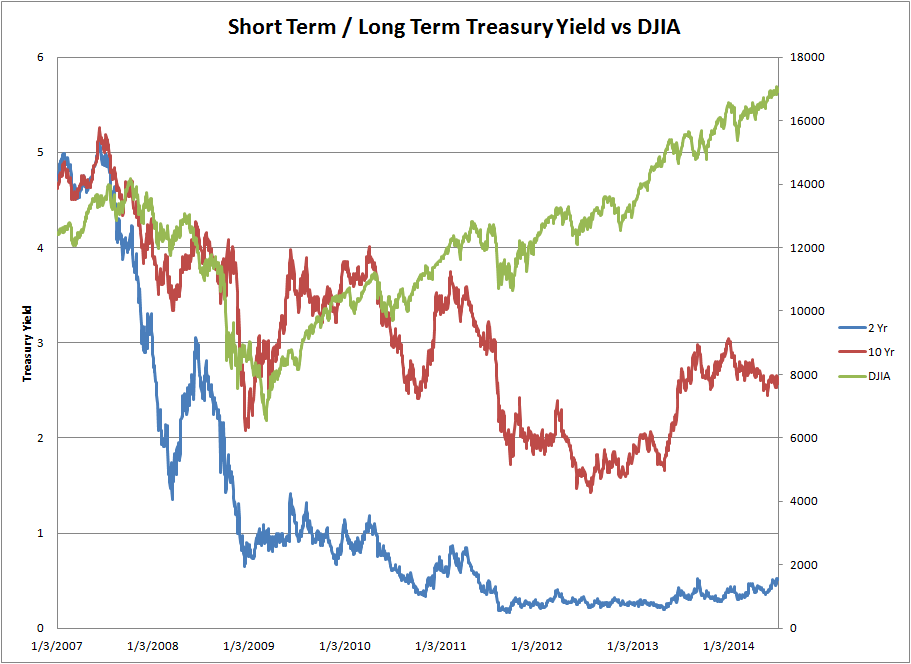 Interestingly, this chart confirms that the Fed’s monetary policy during both the financial crisis and the road out of the financial crisis was sound and the right course of action.  It cradled the American economy, staved off inflation, and kept the secondary market’s cost of capital at a rate that was low enough to foster the growth that would ultimately enabled the economy to rebound.  The contrarian view discussed in 2011 as the FOMC mulled over continuing Quantitative Easing, was that the Fed’s aggressive and non-laissez faire monetary policy presented a moral hazard since the bank of last resort had essentially become the bank of first resort.  And could this ultimately be reversed.

This week, the Federal Reserve, now under Chairwoman Janet Yellen’s leadership, announced the official end of this program; punctuating to the markets that it is in fact time for them to stand on their own and the Fed can return to its former charter of monitoring inflation and using its monetary policy to keep both inflation and unemployment at reasonable levels.  The danger of moral hazard, if you will, is abating…swiftly.

In these months that I have spent as a “student” of macroeconomic policy, I find that I have also learned a bit about the importance of leadership.  Ms. Yellen’s predecessor, Ben Bernanke was a student of the depression.  When he saw signs that America could easily drift back into the dark ages of the 1930’s, he sought to do that which was not implemented during this prior error.  He sought to be a different Federal Reserve.  The Federal Reserve of 1929 took a back seat to the economic crisis and assumed that the laws of Adam Smith’s economic theories would rescue the economy.  This resulted in a painful recovery for which many American never truly recovered wholly.  Mr. Bernanke understood that although it was unfortunate that our banks and financial institutions had become too big to fail, ignoring the reality of the new global economy and the role that the United States plays in it would not make the financial crisis magically disappear.  His Federal Reserve had to be different.  His Federal Reserve had no choice but to walk the line of moral hazard.

It would be easy to isolate Bernanke’s experience as Federal Reserve Chairman and to believe that such a role is entirely unique.  My view is that leadership is leadership and though the context may vary, the general skills and quality of a leader remain fairly constant across a variety of use cases.

For example, under the leadership of Colman Mockler between 1975 and 1991, Gillette avoided three takeover attempts that likely would have altered the future of the company. Each time, the firm was offered exit strategies that would have offered nice returns for shareholders with the final offer potentially providing a $2,.3 billion short-term stock profit, of which Mr. Mockler would have nicely walked away into the sunset.  Mr. Mockler, however was focused on the greatness of Gillette and knew things the market couldn’t possibly know.  In the case of Mr. Mockler, the story was that Gillette had secret development projects underway that were not yet reflected in the stock price but were sure to catapult the company to new levels.  Those projects were the Sensor and Mach 3.

“In the end,” wrote Jim Collins in his book Good To Great, “Mockler and the board were proved right, stunningly so.  If a shareflipper had accepted the 44 percent price premium offered by Ronald Perelman on October 31, 1986, and then invested the full amount in the general market for ten years, through the end of 1996, he would have come out three times worse off than a shareholder how had stayed with Mockler and Gillette.”

Procter and Gamble purchased Gillette in 2010 for $57 billion dollars, a 2,378% improvement on returns.    It’s a shame that Mr. Mockler did not live to see how correct his strategy really was.  This is the happy path use case.

The unhappy use case, of course, exists through a multitude of stories and companies that no longer exist precisely because of poor strategic visions, lack of buy-in, ignorance of the historical context and failure to accurately monitor and measure their tactics and/or identify short-term course corrections that could have advanced a longer-term vision.  These are cases of executives driving with their eye off the road, simultaneously eroding marketshare and investor confidence along the way. In other words, companies with good strategies but terrible leaders will have sub-par results.

In the strategy world, we attempt to review the world with a macro lense.  We take in all the details and align on a long term vision.  We shift between macro and micro views to plot a course that grows shareholder value and enables future success.  We establish dashboards (Key Performance Indicators) that provide insight into the efficacy of our tactics  and we adjust accordingly as telemetry dictates.  Whether the executive is setting the FOMC agenda or laying out a strategy for a startup, the core skills required seem to involve the same steps: