In Defense of Return of the Jedi 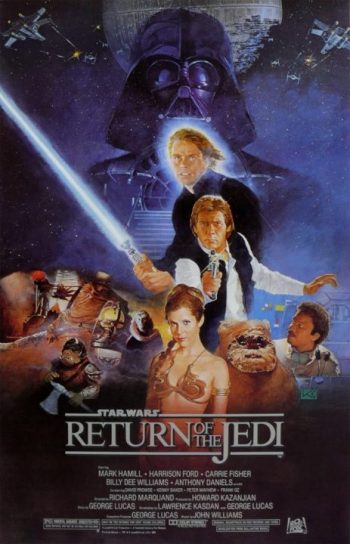 False equivalency is a serious danger to reasonable debate. Wait, wait! This isn’t another rant about the U.S. Presidential Election. No, my concern is something more impactful to our democracy, our society, and our culture: ranking the Star Wars films. Like many of you, I’m looking forward to the next Star Wars movie: Rogue One. While this installment is not part of the main series (Episodes I to IX) it is a major film event. And, more importantly, it is a gateway to a silly argument: that Revenge of the Sith (ROTS) is better than Return of the Jedi (ROTJ).

In 2005, there was serious discussion among geeks and civilians alike that ROTS was the “good” prequel and that it was more serious and had better fight scenes than ROTJ. But now, I think the country has sobered up to our national nightmare (prequels, not politics). ROTS benefited from incredibly low expectations following The Phantom Menace and Attack of the Clones. Those awful films also created a new perspective on ROTJ – that it was the beginning of George Lucas’s creative descent, that it offered clues about where things might go wrong, that it was too light and paled in the shadow of The Empire Strikes Back.

To be fair, ROTJ is not as good as Star Wars (I’m not going to call it A New Hope) and Empire. I mostly agree with some of its criticisms: Ewoks were a cuddly marketing gimmick and a letdown if you were hoping for a planet of Wookies. Han Solo was emasculated. The Rancor special effects looked cheesy. Did we really need another Death Star?

But, it is also an enjoyable film. It completes the original trilogy nicely. It has a great ending with a rousing set of battles, such as Rebel fighters vs. the Death Star, and Tie Fighters, Rebels, and Ewoks vs. Stormtroopers, and Luke vs. Darth Vader vs. The Emperor. All of that built to an emotional and satisfying thematic climax. It has a coherent story, great characters, and memorable scenes. All qualities lacking in the prequels. A few of my favorite elements of ROTJ that illustrate my point:

Are there any scenes or lines of dialogue that even come close to that in ROTS? I can’t think of any that come close. I won’t go through the process of breaking down just how terrible that movie is (this guy does it better). My main point is that ROTJ is a good film in an incredible trilogy. ROTS is a bad film in an awful trilogy. Please don’t try to put them on the same level.