I feel more Mac this morning, but maybe PC in the afternoon

I stumbled across an interesting infographic the other day. I’ve capture the media section for those that don’t want to click through. 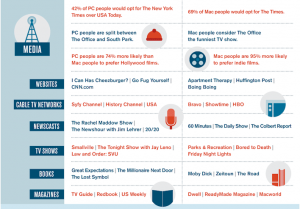 I’m not sure I agree with all of it, but it definitely contains some eye opening Mac vs. PC nuggets. I would never consider myself a vespa fan or someone interested in Indie films, but I do live in a city and I oddly enough, I enjoyed Moby Dick when I read it in high school.  The truth is probably somewhere in between on what a hip Mac user wants to do with their time or likes and dislikes as compared to someone who prefers PCs.

But what interested me most is how you could potentially carry this concept forward to something like smart phones. Or even tablets!  In other words, how would someone with a Android OS phone compare with an iPhone aficionado. To make it more fun, mix in some Blackberry and Windows user smart phone users.  My sense is that the iPhone users might stay roughly the same in terms of likes and dislikes, but where would the percentage that favors Android’s more open stance come from…would it be the PC users who are not the hummus or Hot Toddy type or people on the Mac side who are straying from the Cupertino cult.  Food and drink for thought, I guess.