Finding Courage Above the Tree Line 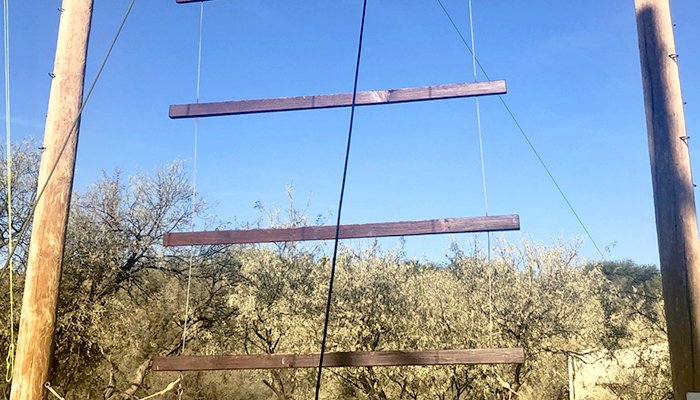 Last weekend, my girlfriend and I met up at a spa in Arizona with the promise that we would “enter the healing of an award-winning desert sanctuary and leave chaos behind.” For months, I’d been anticipating total relaxation – laying by the pool, reading books (but not the electronic kind since devices are not allowed), and going to the spa.
The first morning, my friend Beth and I got out of bed early to join our planned group hike, called “Giants Ladder.” When we found our leaders, we were unpleasantly surprised to find out that what we thought was a hike was actually an adventure course. We had signed up for all our activities over a month in advance and apparently neither of us had read the description.
(Note: I have done enough ropes courses in my past to know that I don’t like them. Honestly, I don’t really like any activity with “adventure” in the title of it. I’ve done the telephone pole, the wall, the spider web, the trust fall, and all the other typical individual and team challenges. Nothing about these activities ever really appealed to me even though I have to admit I’ve learned a few things through doing them.)
So there we were, the vacation not starting at all as planned, and we had a choice to make. While I don’t seek adventure, I do like to go with the flow on vacation. Plus, we’d signed up. We looked at each other, shrugged our shoulders, and agreed to proceed. 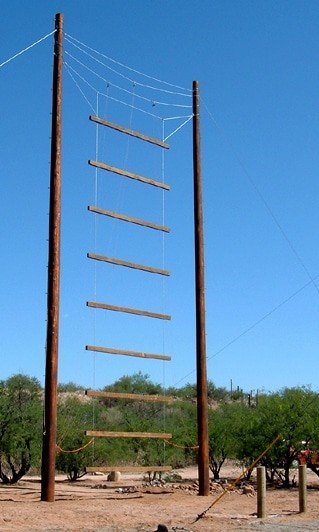 When we arrived at the high ropes course, it was pretty clear which “adventure” was ours. It was, in fact, a 40-foot tall giant ladder with about ten steps to the top. Each step was a beam, connected by two ropes on the side. The leaders then explained that our goal was to climb the ladder, without touching the ropes. As we watched the first team try to climb, we realized this was even more of a challenge than it initially appeared. They were each able to hoist themselves up to the first beam and then reach to stabilize themselves using the beam above. But as they tried to go up further, we realized the beams that looked evenly spaced from the ground actually got further apart, enough that the climbers weren’t able to reach the beam above. Still, by helping each other, by providing a step or a hand, they were able to get a little further. It took about twenty minutes, but they were able to get to the third beam. At that point, one of the guys said he couldn’t go further, and they were done. Before we knew it, we were climbing on it ourselves. As expected from watching the previous group, we were each able to climb to the second beam on the ladder, but then we needed to start working as a team to get up further. Once we got to the third beam, I was quite satisfied and would have been happy to quit. In fact, our third teammate did quit. This is the first moment that is really etched in my memory. We stood on that third beam, feeling proud of what we’d accomplished, feeling a little physically exhausted, feeling tempted to be done, and feeling curious about trying to go a little higher. It was a classic plateau. We stood there for a good five minutes trying to decide what to do. We weren’t sure we could go further with just two of us. I started throwing out ideas and jokingly suggested we could call in Kevin, one of the leaders, since they told us at the beginning we could use a leader on our team. Beth liked this idea and said, “Let’s do it!” The leaders were quite surprised at our creative request, but they agreed, and Kevin climbed up. And that was the moment we set our intent again. We were committed because we were in it together. 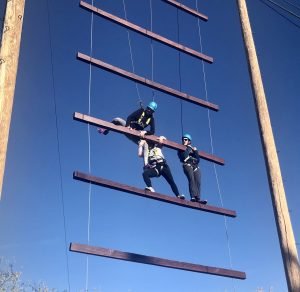 From there, we hit our stride. Each step was a little harder and involved a little different strategy, but generally, I’d step on Beth first to pull myself up and then sit on the next beam. Beth would step on Kevin to do the same. Then Kevin would pull himself up. And then came the hardest part for me… I had to go from straddling the wobbly beam to standing up, with nothing to hold other than my teammates. The second moment that is really ingrained in my memory is a moment when I was sitting on the fifth beam trying to stand up. I had to shift from straddling the wobbly beam to standing on the beam. 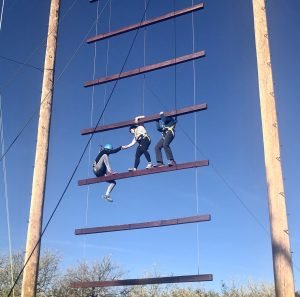 I couldn’t reach the beam above. I was pretty sure going from sitting to standing on that wobbly beam was physically impossible on my own, so my only way to pull myself up was to hold onto Beth. She offered her arm and encouraged me to hold on higher at her elbow. I put my foot on the beam. Did I mention it was wobbly? I took a breath. Then Beth said something amazing, “I feel stable. I’ve got you.” It was amazing because knowing she was confident she could support me helped me trust her more. With her help, I made it to standing and everyone cheered. We made it up that step and a couple more before losing our balance. It was a pretty awesome climb.

We all talked at the bottom about what we got out of the experience. For me, I had a couple of takeaways that I think apply to all kinds of challenges.
Takeaway 1: Intentions Are Stronger Together. For me, when we hit that plateau, it was really powerful to take a breath to take in what we had accomplished and then reset our intention, as a team. Whether we are progressing through a major project, taking on a transformation, or growing a company, stopping along the way to reset as a team may help increase resolve and the energy to move forward.
Takeaway 2: Communicating Authentically Builds Trust. I noticed how much it helped me to know when my teammate was feeling stable and when she wasn’t. My takeaway is that I shouldn’t feel too humble to say, “I’m feeling strong right now and I can help you through the hard part.” On the flip side, I shouldn’t feel embarrassed to say, “I’m really freaked out right now.” Being authentic can help us best support each other.
The next challenge is always in front of us (apparently, even on spa getaways). We all know the power of teams. Still, in that vulnerable moment when we feel like we are wobbling on a beam 25 feet in the air, it may not feel natural to trust a team member. If we can trust in that moment, set an intent together, and communicate about how we can support each other, we can find our courage and accomplish feats that wouldn’t be possible on our own. 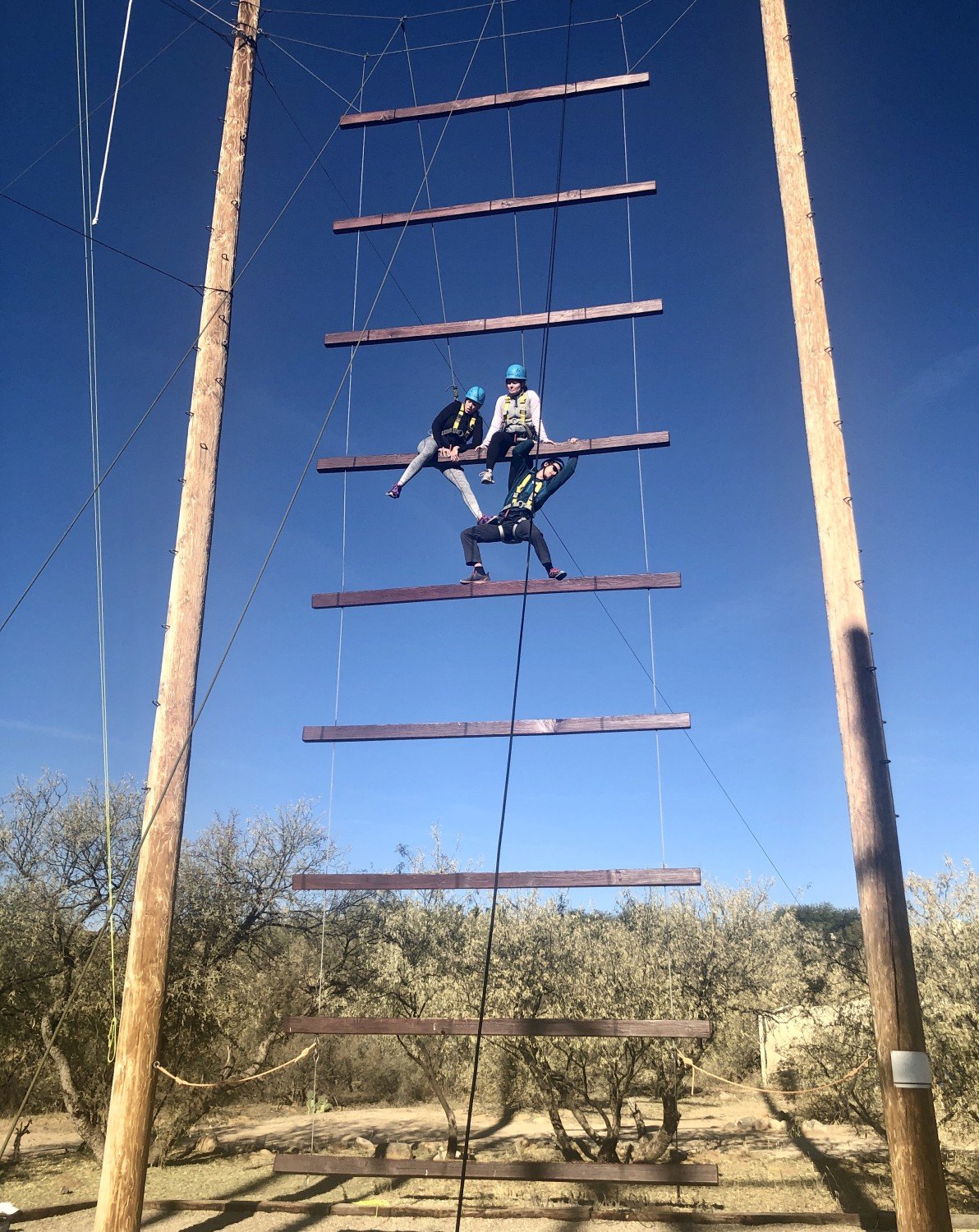 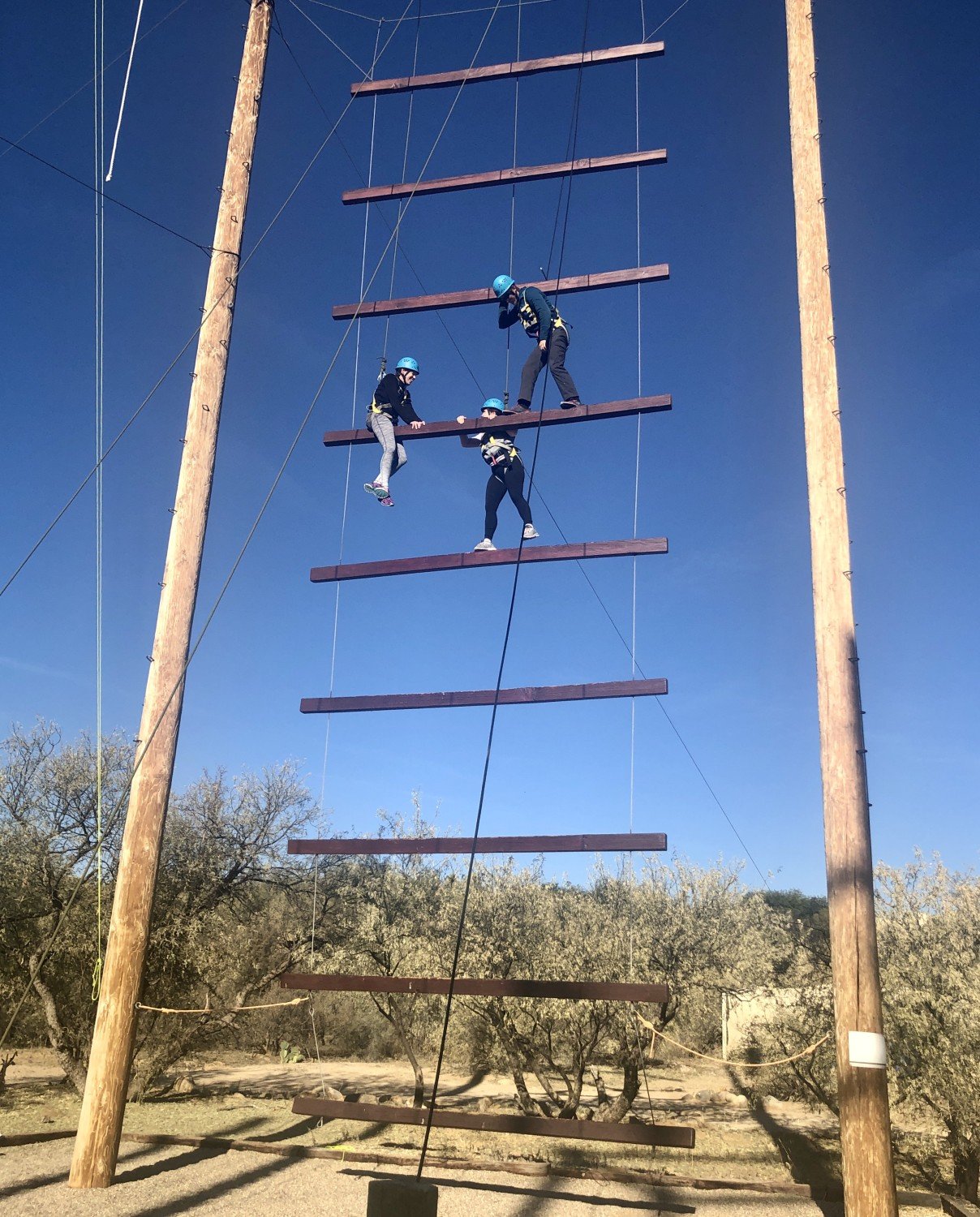