Diaries of a working mom Chapter 3: Traveling (with baby) 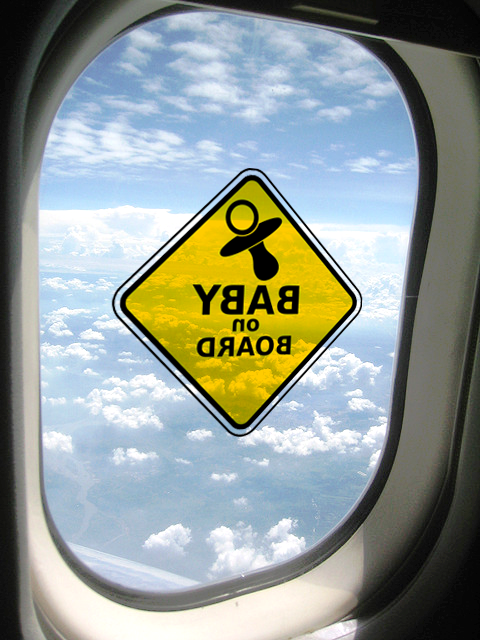 Yes, I heard that a few times. This was not the plan. When I agreed with my demanding boss to come back to work in six weeks, our agreement was that I wouldn’t travel for a while and I’d work out of the house part time. The first thing that went out the window was any semblance of part time, closely followed by a need to get on the road for a couple of short trips. When a new prospect called me (I mean “my boss”) to ask us to do a really interesting IT strategy gig that had to be started very quickly to hit some deadlines… I caved. The client was willing to be flexible on how we did the travel if I’d come do the gig, so I started brainstorming on how I could work this out. I realized that taking Gus with me would be the easiest answer.

So Gus and I hit the road when he was just over two months old, along with our nanny, who hadn’t been on a plane in 25 years. I’m not going to lie, I was very nervous, which is funny because I am a seasoned traveler who finds airports way more comfortable than local highways. As much as I get lost everywhere else, I navigate airports with some kind of sixth sense of direction. I can do it while carrying on a conversation, texting and even reviewing a presentation. I fancy myself some kind of airport super hero.

That said, all the complications and unknowns of traveling with a kid seriously stressed me out. I’ve whizzed through that “Expert Traveler” line over the years and caught glimpses of people in the “Family Travel Line” like they were some kind of alien species. But I knew I’d figure it out. I got some good advice from some other traveling moms, and I just dove in, knowing I’d figure it out one way or another!

On the first trip, we got there over two hours early (I used to leave my house an hour before the flight). We paid complete attention while going through security, even asking questions of the security officers to make sure we were doing things right. We apologized to the people behind us when we were slow.

On the way back on that same trip, I was feeling a bit more comfortable. I even decided to get a coffee and try to carry that amidst all my other stuff (more on that later). And now, after 4 trips and 8 flights in 3 weeks, Gus has traveled to his first 5 states and I’m feeling like I deserve back in the “Expert Traveler” line at the airport! I can no longer secure my coveted exit row seat since he’s sitting on my lap, but he’s so cute we got upgraded to first class – even better!

Anyway, it is TOTALLY doable. Here’s what I’ve learned along the way about traveling with an infant. I’m sure by the time he’s a few months older this will all change, but here’s what I know for now. I would love the tips of other traveling moms and dads too!

1. Bring a stroller, infant seat + base, and gate check cover. You can gate check these things for free in addition to your normal two carry-ons. I took my Snap-N-Go stroller because it is so compact for the rental car. I like gate checking these versus fully checking them because they make for an excellent luggage carrier and it provides a place for the baby to sleep if you want to put him down in the airport. Now, you do have to put all this through the scanner (no one told me that), so make sure you can deconstruct the stroller quickly. Even though I load it up with my stuff now, I can pull the bags right off, pull the carseat off and flip it upside down and then fold up the stroller faster than the belt gave me time to load everything on. Right before boarding, I cover the carseat and base with a “gate check cover”, which is just a cheapy plastic bag that protects the car seat from getting beat up and germy.

2. Wear the baby in a carrier (Baby Bjorn, Lillebaby, whatever). DIA actually lets you walk through the scanners wearing the baby in the carrier and then only asks to swipe your hands to check for explosives. Other airports want to do a full pat down, but I don’t mind it, even though it can be pretty intrusive. I found this easier than keeping Gus in the car seat and having to remove him to put the car seat through the scanner. Plus, if you have the kid in the car seat, it isn’t stable enough to put the carseat base in between the carseat and stroller, so you have to carry the base, which is surprisingly heavy.

3. Be prepared to scan breast milk. TSA is intentionally vague about how much breast milk you can carry, but so far I haven’t had any problems. I brought 20+ oz with me on the two work trips and it wasn’t a problem (I may have an update after my next trip, as I’ll be toting back 2-3 days worth and I won’t have a baby with me). My best advice here is to tell the TSA people up front what it is so they can easily do their little scan. They unscrew each bottle and wave a piece of paper over the top. Oh, and you may not want to use a fancy Dr. Brown’s bottle with the contraption that goes into the bottle because then they drip it around and your best girlfriend might get completely grossed out when just a little bit spills on her.

4. You might consider checking luggage – it is at least now debatable. Keep in mind, one of my major breakups with a previous boyfriend started with a fight about him wanting to check luggage. But with the extra stuff you have to bring for the baby… and the stuff you are lugging through the airport … you may want to check a bag. I think I’d check a bag if I’m by myself and carry on if I’m traveling with someone else. I did two of my four trips in carry on but I had my husband or my girlfriend pack some of the stuff we needed. It is possible to carry it all, if you have a good stroller, you just push it with one hand and pull the suitcase with the other (baby in carrier of course).

5. Take someone with you the first couple times! Even though our nanny hadn’t traveled in 25 years, having her with me getting through the airport was huge. She could help schlep all our stuff and when I had to go do a diaper change, she could watch the stuff. I’m totally comfortable traveling alone with Gus now, but I was very happy to have someone with me the first couple times while I figured it out.

6. Not having a schedule helps. We are just now starting to get Gus on an… ahem, routine. On those first few trips, the feeding him on demand and letting him sleep when he wanted was seriously helpful. I think this will be harder once he gets into a routine, because even if you try to schedule around it, but you never know what the airline delays will throw at you! This is why traveling with them very young is easier. I did try to feed him as we were taking off because I’d heard the sucking helps with ear problems and because it helped him go to sleep.

7. Don’t get coffee. Yeah, I used to always get a coffee before I got on the plane. I’d mastered the art of balancing it while talking on the phone while loading my luggage up top. But even I admit it is just too much with the baby. I thought the cell phone might be too, but I was texting away during our last maneuver through DIA….