2-Way UBER Ratings… is this just the beginning?

Six months ago I registered with UBER. I’ve used the s 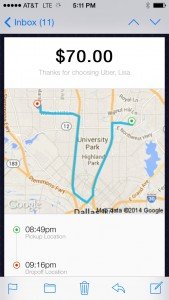 ervice a couple of dozen times or so and have grown increasingly addicted to it. When I was in Dallas recently I used UBER to get from TopGolf to my friend’s house.  It was an interesting experience, to say the least. To begin, the driver claimed he was 3 minutes away, but did not show up for twenty minutes.  Then he hauled #@$! on the highway, so fast that I didn’t realize we were headed into downtown until we got there.  As you can see from the map, not the most direct route to where I was going.  I finally interrupted his phone call to tell him I’d appreciate it if he slowed down. I made it home safe, but was on the phone with my husband telling him to hang on till I got inside.  I’m not generally a person who rates my experiences online, but this incident was so poor that I was compelled to use the UBER rating system. I gave the driver one star out of five. I selected “Route” from the several drop down choices for my rating.

The next day I requested another UBER ride and that’s where things got interesting. When that driver arrived, he spent quite some time explaining the route we would be taking, and it wasn’t an unusual route.  It was a pretty direct route, on the highway, to the airport.  It was such an unusual experience that it led me to believe that the ratings given to the drivers are available very soon after they are received. I assume the immediate feedback from a customer helps the next driver address the concerns of that rider and provide better service. So, I did a little investigating.  Apparently there are drivers who are unhappy with the UBER rating system, saying one instance with one cranky rider can hurt their business.

Then I read this article and learned that the ratings go both ways – drivers are also able to rate their passengers on a 1-5 scale. If a passenger is stingy with a tip, or drunk, or fails to appear for the ride they ordered, they will most likely get a poor rating and may not be able to secure an UBER ride in the future. You can learn how to find your personal UBER rating here.  This really got me thinking.  I mean, I think I’d get good ratings as a customer.  I have reasonable expectations, I tip well, I show up… but I have been known to be quite fired up on my cell phone while in a car.  Hmm.  I’ll probably think twice about that now!  I wouldn’t want to be black-balled from UBER over my chattiness…

Then I really got to thinking.  What if this kind of rating expanded beyond UBER to all service providers!  What if, just like I can go see a plumber’s yelp ratings, they could get some generic rating on me from all the other service providers out there!  Again, I’m not personally concerned about my behavior, but I do find it fascinating and possibly concerning.  I suspect I’d get a 1 (or 5, depending on which way you look at it) on “ability to negotiate” and then I’d end up getting constantly overcharged.

Overall, I think this two-way rating system could be good.   It makes everyone accountable. I kind of like this opportunity to prove myself as a great customer.  But, it sure is a mind-shift, isn’t it?